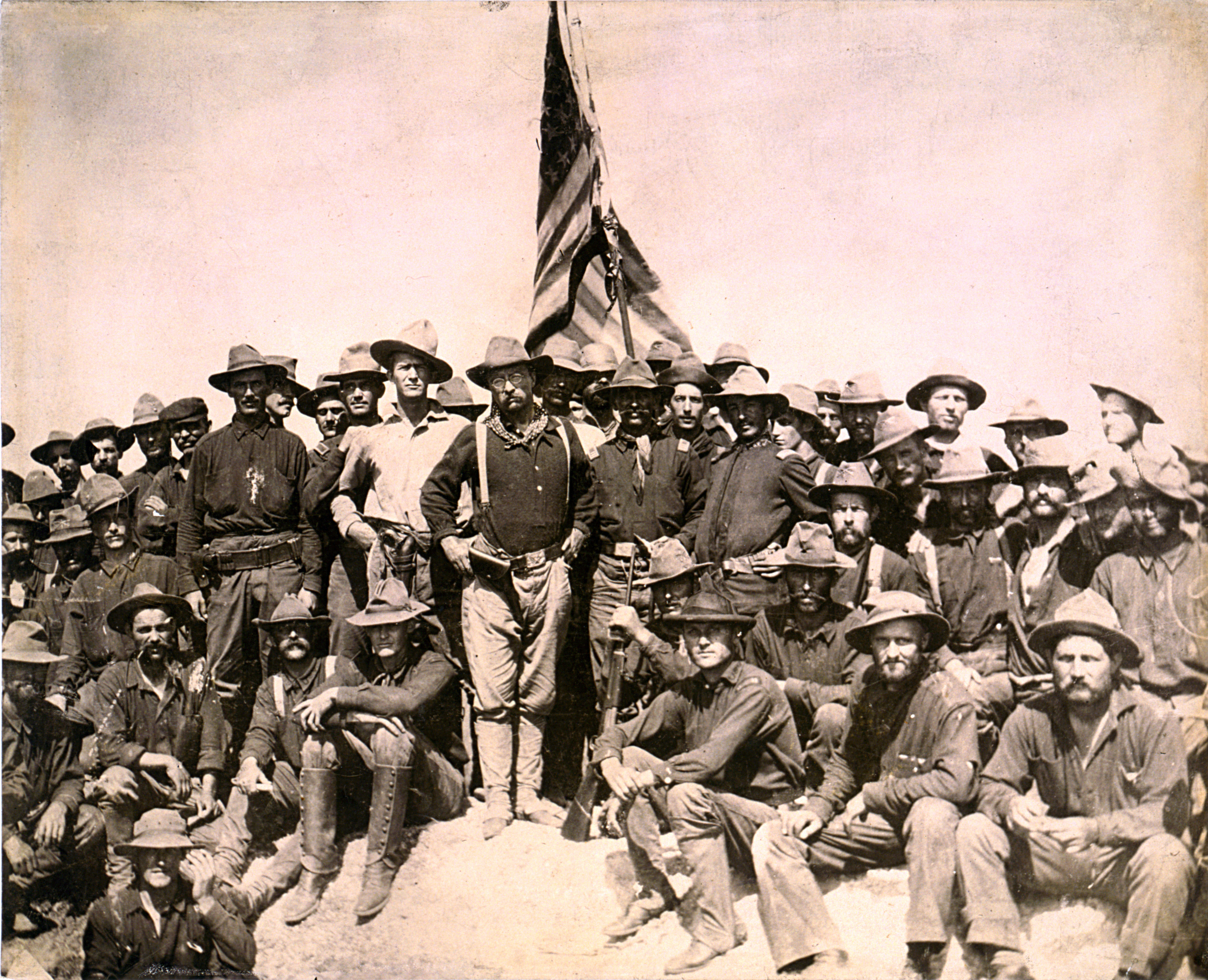 Teddy Roosevelt is the Man We Need 100 Years Too Late

No matter whose side you were on, this political season was a whirlwind. So, I thought it would be helpful to offer a contrast to our current duly elected officials to those of a different time. A manlier time. A time where you could sink the Spanish Armada after being the NYPD commissioner before becoming a Nobel Peace Prize winner. All before the coffee kicks in for your morning deuce. Of course, you could really only do that if your name was Teddy Friggin Roosevelt.

Roosevelt became the 26th President at age 42 but, an adolescent Teddy was forced from the start to toughen up. Severely asthmatic and suffering from nearsightedness, it seemed he was a perfect candidate to play Mikey in The Goonies. Luckily, Theodore Sr got his son into a rigorous weightlifting and boxing routine. He overcame his illness by sprinting up the Alps with his father at age 11. Apparently, if you just make yourself awesome, your body has no room for weakness… #Science. In his early 20’s, Teddy’s girlfriend turned down his marriage proposal. Then, Teddy said something like, “I don’t think you heard me right” probably while grabbing his bulge, two hands needed of course. She quickly realized the biological potency of this perfect specimen and married him on his 22nd birthday. Naturally, the happy couple, being more Xtreme than the X-men, went mountain climbing for their honeymoon.

A Career in Badassery

At 23, our asthmatic mountain goat became the youngest state representative in New York. By contrast, I’m spending 23 seeing how many Doritos crumbs I can get stuck in my foot before I put a sock on. After the death of his wife and mother, Teddy moved out west and started killing things and writing books about the things he killed. As a deputy sheriff, Roosevelt went all John Wick on some douche who stole his boat. He tracked them for two weeks through the Dakota wilderness. When he finally caught up with them, Teddy kicked their ass and handed them over to the authorities where he stood watch over the boat thieves for forty hours straight. He must have liked the taste of justice. He returned to New York and promptly received an offer as position as Commissioner of the NYPD.

The Last Time the Navy Was Cool

Alright, that title was just for me. Anyway, in 1897 President McKinley appointed Roosevelt Secretary of the Navy. Around the same time, Cuba and Spain were getting pretty ballsy and decided to blow up the USS Maine. But what they obviously didn’t hear of what happened to the last people to mess with T-Dawg’s boats. So, Teddy sent Admiral George Dewey (#NorwichAlum) with a squadron of warships to the Philippines and sank the entire Spanish Armada in the same amount of time it takes me to complete a rant on the biggest waste of 7 years, A.K.A the T.V. show Lost (about 4 hours). Also, Roosevelt had no authority to take these actions but, who’s gonna tell him no? McKinley yelled, “GIVE THE MAN WHAT HE WANTS!” and the Spanish-American war began.

Now, Theodore is the kind of man who finishes what he starts. Shortly after the declaration of war, Roosevelt resigned his post and established a volunteer Cavalry regiment known as the Rough Riders. The regiment earned its merits at the Battle of Kettle Hill where Roosevelt would lead from the front to dislodge the Spanish army from their entrenchments. In 2001, Roosevelt received the Medal of Honor for his actions on Kettle Hill. Roosevelt returned to New York and decided to run for King. However, fearing the spring cleaning on corruption Teddy was going to do, George Steinbrenner and Roger Goodell nominated him for the do-nothing job of Vice President. The McKinley-Roosevelt ticket won in 1901. Almost immediately McKinley was assassinated. Or, as I imagine it, Roosevelt got so close to the seat of power he was destined for that the ghost of Abe Lincoln ripped out McKinley’s heart whispering, “you are not worthy” before handing the sword of Excalibur to T-Dizzle. Remember, I have a history degree.

As President of Awesome, Roosevelt won a Nobel Peace Prize for negotiating the end of the Russo-Japanese War. That’s right, a Peace Prize for ending a war through diplomacy and a MoH for stacking bodies. Then, Roosevelt created an entire fleet of battleships, sailed around the world and stopped at a port in every nation of a country who thought they could get away with as little as a sack tap to America. This was, of course, a part of his philosophy to “Walk softly and carry a big stick.” Presumably to beat the ever-living shit out of his enemies. Teddy is famous for stiff arming death while giving a speech in Milwaukee. Here, Roosevelt was shot in the chest and didn’t even stutter. It wasn’t until two hours later, after the speech finished, that he received treatment. After his time as Most Powerful Man on Earth, Roosevelt continued to exercise his brass balls and went on multiple hunting safaris in Africa because killing human-sized things just wasn’t exciting enough.

What We Can Learn

What we can learn from Teddy Roosevelt is that we suck. How do we compete with him? We don’t. We can only try and fit inside the massive mold of this man like the puny Russian stacking dolls that we are. He refuted the stereotype that tough guys can’t be intellectuals. A Harvard graduate and a war hero. A conservationist who would’ve made bank in the ivory trade. Oh, he was also blind in one eye from bare-knuckle boxing in the White House. When T-Rose passed away in his sleep, Vice President Thomas Marshall was quoted saying, “Death had to take him sleeping. For if Roosevelt were awake, there would have been a fight.”  For those of you who have made it this far, I hope you feel as emasculated as I did while writing it. As always, stay manly.