Home Outdoors Diving: You Really Shouldn’t Do It 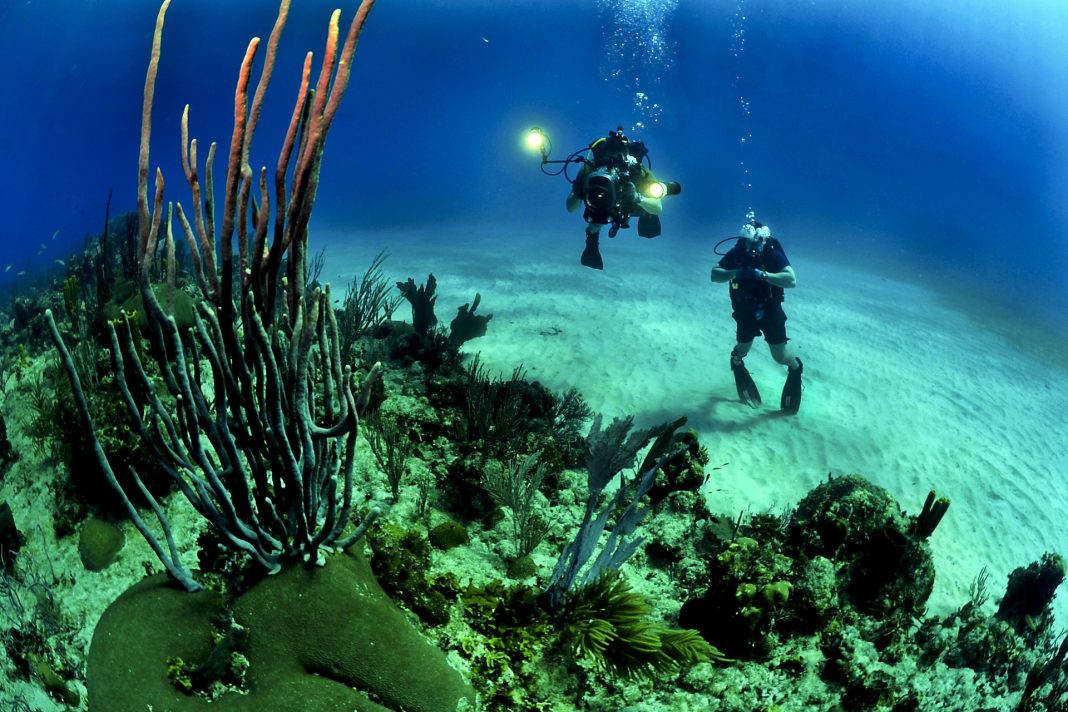 Hi folks, nice to meet you. I’m Jeff from Wisconsin. I hear that you’re thinking about taking up SCUBA diving? Well, I have one word for you. DON’T. You see, there are a few things that we Cheeseheads know to be true. Beer is the finest liquid. Cheese makes anything better. And going into the ocean means that you’re going to die. It’s a certainty.

You see, we’re a people much more comfortable with driving on a frozen lake than actually going INTO it. Ice fishing is a pastime. Seriously. I think Wisconsin’s motto is “Avoiding the depths since 1848!” If it’s not, it probably should be. I must have only narrowly avoided death over 100 times. It didn’t feel all that threatening, but I very likely barely escaped with my life. Sometimes I tempted fate for over an hour at a time in the open ocean well below the surface. It was amazing. Diving. You shouldn’t do it. 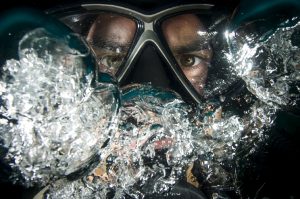 My wife and I just returned from a dive vacation in Bonaire, which is a little jewel of an island that lives and breathes diving. You shouldn’t go there. The dangers of the deep are many. The main one is drowning, of course. 3,000 PSI of air will only get you so far. In good conditions with ok fitness, that’s definitely over half a mile, but that’s nothing in the grand scheme of things. Sure, the buoyant vest that will keep you floating on the surface forever once it’s inflated will probably add a little bit of distance to that. But once you’re on the surface, your legs dangle in the water and attract sharks. It’s true! The instant you surface, all the sharks within approximately 1,358 miles instantly start heading towards you. That’s true for surfers or divers. I’ve done both extensively (not well, but got a participation medal). Though I’ve never actually seen a shark in the open water, I’m positive that they’re on the way. I just get out of the water before they can cover the distance. I did see a really big eel once. It was hiding in some colorful coral. I’m sure it had big, scary teeth.

I’ve never finished a dive with under 600 PSI of air left in my tank, but it could happen. You could become so distracted by the colorful fish and coral that you completely lose track of time, depth, and remaining air. If your dive buddy ALSO completely loses track of time, depth, and remaining air, you could be in trouble. Why is the buddy so important? They have a big tank of air on their back, with an extra regulator for you to use if something happens. I’ve never actually had to use it, nor have I seen anyone else have to use it, but it’s there. I did see an o-ring fail once. We had to abort the dive and head back to the beach. Bubbles are good, but not when they aren’t coming out of your regulator. It’s a good idea to check your buddy for excess bubbles when you start a dive. Just sayin’.

Hmmm, other dangers. I suppose that there are colossal squid that could be threatening. I don’t think they ever come up to the top 130 feet of the ocean, which is the limit of recreational diving, but they could. It would be horrible. They have beaks, like bottom dwelling giant birds with tentacles. If you’re hanging out at 1 to 2.2 km below the surface near the Antarctic, you could be in trouble. I’m pretty much out of non-self-inflicted dangers at this point. The biggest danger in diving is yourself. Folks have dove to over 700 feet without tanks and over 1,000 feet with tanks. I don’t recommend it, but some people will always try to find the limit. My limit is a little over 100 feet, less if I’ve already reached the bottom. No, the biggest danger in diving is you. Well, for me, it’s me. But you get what I’m saying.

Once I accidentally pulled one of my weights out of the vest when I was reaching for my regulator. Sure, that made me extremely floaty, but it was unsettling. My resultant thrashing around meant that I briefly lost a fin as well. In my defense, it was 7 miles off of the coast, and the waves were a little large. One of my buddies calmly handed me my fin … and then put it back on for me … and rarely mentions it, except almost every time I see him. I wasn’t in any danger, but my brain didn’t know that. The rational part had shut down by then because I had gone beyond my comfort level. That’s really the key in all of this, expanding your comfort level little by little. First, it’s some pool work, then it’s some shallow dives, maybe some fish identification, and then suddenly you’re at the bottom of the Marianas Trench. Ok, so that doesn’t happen. You DO have to do a “deep” dive once you go past regular open water certification. Deep is anything below 60 feet, but less than 130. So a deep dive is anything that’s about 36,000 feet above the bottom of the Marianas Trench. That may seem like a lot, but it’s really nothing. 36,000 feet is only a bit more than 6.8 miles. I drive further than that on my way to work. With the air conditioning on. You don’t have air conditioning while you’re diving.

You also probably shouldn’t eat or drink, though I’ve had some Coke ™ out of a straw at 96 feet. You probably shouldn’t dive at all. That’s really my point here. Diving is bad. I was raised to know that the ocean is dangerous. It has big fish with teeth, big mammals with teeth, and big waves. Sure, I’ve only seen the (moderately) big waves, but I know the other ones are still out there, just waiting for me to be in the water and not on the water. Maybe I’ll stick to freshwater dives for a while. There aren’t any color fish in fresh water, but there’s really not much of anything. There are rocks, or sand, and maybe some silvery fish. I may or may not have taken my regulator out to breathe in an air bubble from the ceiling of a cavern (it looked like mercury) at an undisclosed location in Florida. You may need a flashlight, but you also don’t have to worry about big-tooth fishes if you’re diving in a spring. I think it’s a fair tradeoff. Sometimes. 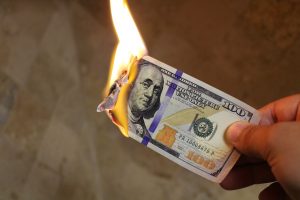 Oh! I almost forgot! Diving is really expensive. Sure, you can rent just about everything from a dive shop, but you need to have your own mask, fins, and snorkel. That can run into the triple digits if you want the expensive stuff. A decent dive computer is also in the triple digits. If you’re going to get ONE piece of equipment aside from normal snorkeling … I mean SCUBA … gear, it’s a dive computer. The dive computer thinks for you and some of them beep when you do something stupid, like get lost in the aquatic scenery and forget your time, depth, and remaining air. It might warn you if you ascend too quickly or beep at you when it’s time to spend 3 minutes at 15 feet before ending the dive to get most of the nitrogen out of your system.

Did I Mention That It’s A Bad Idea?

The biggest benefit is that you can do multiple safe dives in one day without reverting to those antiquated charts. Who really descends to a fixed depth and then immediately returns to the safety stop before surfacing? Nobody. Know your dive computer and listen to it. Real talk. But a dive computer doesn’t help you at all if you don’t dive. Then it’s just a really big wristwatch. And let’s be honest. I must recommend that you don’t dive. It’s super dangerous. You probably shouldn’t buy a dive computer, and you probably shouldn’t dive at all. How many sharks are there within 1,358 miles of your location? 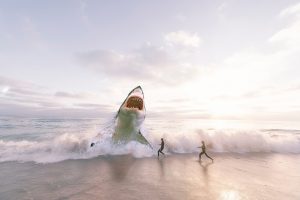