Throughout the course of history, men have been shaving their facial hair. Some of the earliest signs of clean-shaven men can be found in cave drawings depicting men without beards. And many ancient cultures such as the Egyptians greatly valued hairlessness. But this hasn’t always been the case.

History of the Shaving Razor – The Cutting Edge

The Ancient Greeks greatly valued their whiskers and would only ever cut them during times of mourning. Their Roman counterparts were a bit more fickle. They would decide the fate of their beards depending on whether the emperor wore one or not. In the Middle Ages, men often also followed suit to their leader’s beard choices. During the Protestant Reformation, facial hair was even used as a way for Protestants to fight the Catholic norm. As protestant men grew beards since the Catholic clergy were often clean-shaven. Whether beards are in or not, most men throughout history have had to shave at one point or another. To do that they needed a shaving razor. 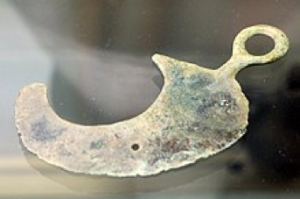 The beard has been viewed as a sign of strength and dignity for millennia, but in the cultures that did like to keep their faces smooth, it hasn’t always been the easiest endeavor. The earliest razors were often made of bronze or obsidian. But other tools were implemented to keep those pesky unwanted hairs away. Some of the more unorthodox methods included using clam shells as tweezers or shark teeth as primitive blades.

The first major innovation in the world of razors came from an English inventor. Benjamin Huntsman used his skills with the crucible to create a hard steel that he fashioned into the straight razor. His creation was not appreciated in his hometown of 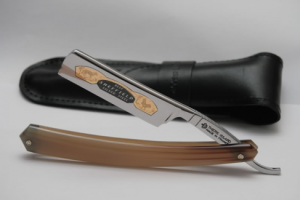 Sheffield, and it was not until the French began to use his razors that the British decided to join in. The quality of Hunstman’s Sheffield Steel was so great, that it is still used today in France; particularly by world-class cutlery manufacturer Thiers Issard. Manufacturers began to create more straight razors, many with decorative handles and shipped them around the world.

The straight razor provided a smooth shave as the dominant method of shaving for over 200 years. Unfortunately, the tool itself was not always practical. Straight razors require a large amount of routine maintenance to keep them in working condition. The blade itself must undergo a process called stropping to keep the blade properly aligned; as the sharp but thin blade will become bent out of shape after each shave. The blade must also be sharpened as well, to ensure the best shave possible.

Along with high levels of maintenance, a straight razor requires a high upfront cost. Ffor the best shave possible you also need a barber. This higher cost meant that for many men throughout the 18th and 19th century, that daily shaving just wasn’t a financially practical choice.

Gillette- The Best a Man Can Get

It wasn’t until the early 20th century that men would be given the ability to shave regularly without breaking the bank, and that came with the introduction of the safety razor. King Camp Gillette, an American businessman, was granted a patent in 1904 for 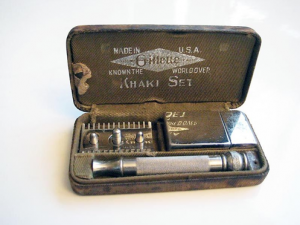 his version of the safety razor. This razor allowed the user to dispose of the blade when dulled, and easily change it with a new one. Other models had been created around that time, but Gillette’s razor soared in popularity as he was provided the contract for supplying American troops with razors during World War 1. These razors became an essential part of each soldier’s kit, as having a clean-shaven face allowed for each man’s gas mask to seal properly.  Following World War 1, soldiers were allowed to keep their razors which allowed them to maintain their new shaving habits upon returning home.

With this economical advancement in shaving, the safety razor became the predominant method of shaving, and while donning a new look, is still the main tool used for shaving today. Gillette and many other companies competed for market share and attempted to innovate the safety razor, by adding more blades and creating disposable cartridges so that the user did not have to handle the blades themselves. Through a few decades of competition, we now have the familiar razor that we can buy today.

If you have any input for FFF, or just to chat, you can reach out to Joshua Brownell via the comments. If NHL is your subject, check out his personal blog.