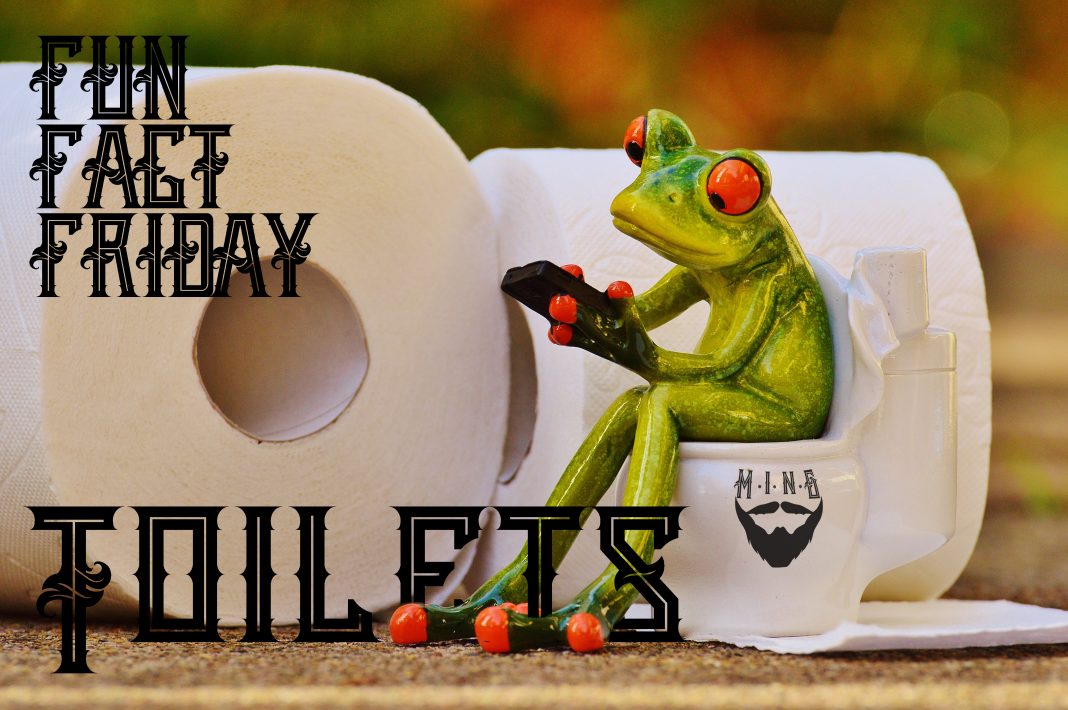 Whether you call it a latrine, loo, or water closet; or, a privy, dunny, or crapper this article is for you. We have many names for the toilet.  We have many types of porcelain thrones, as well. Humans spend between a year and two years on the toilet in their lifetime. According to a UK report, Brits spend more time on their loo than exercising. With all of this time spent on the john, let’s find out some shit about the shitter. I’m sure you’re reading this from the Amimissingoutis Socialmedium-Americadian position.

Where did all this shit come from?

Without further ado, here is what we found on the toilet. The Scots may have invented the commode first, and if they didn’t, the Greeks did. A settlement, Skara Brae in northern Scotland dated 5,000 years old may have had drains for a lavatory. Historians aren’t exactly sure of that, though. What historians are sure about is that the Palace of Knossos on Crete, from 3,700 years ago did have plumbing in the form of clay pans and pipes. This technology would be lost to the rest of Europe for 3,000 years.

Do you call the toilet technology?

Yes. Crude tubes moving excretion from one place to another is technology. In fact, it is leaps and bounds better than shitting where ever the hell you are and the poo globules remaining with you. The Romans ‘Henry Forded’ the whole shebang, and made the Baths of Caracalla. Incredibly, it could service 1,600 people at a time1. The Baths could accommodate all of Fenway Park in under an hour. Just know you’d be shitting and pissing in public. They didn’t have stalls.

The bathroom didn’t get incorporated back into the design of the home until the garderobe.  ‘Dan Snow notes: “The name garderobe, which translates as guarding one’s robes, is thought to come from hanging your clothes in the toilet shaft, as the ammonia from the urine would kill the fleas.”2‘ These Orkin-inspiring rooms also had no bottom where your ass met the pine, meaning your logs built the moat the opposing army had to cross.  Biological warfare is not a recent invention.

That’s shitty, and the toilet isn’t like that anymore.

You’re correct. The first toilet that we would recognize as modern would be the design by Sir John Harrington in 1596, further improved upon by Alexander Cummings in 1775.  Harrington had the idea to use water to flush the waste away. Whereas Cummings added the bend that would keep the odor out. Thank you, you saints of the shit-house.

Toilets were still a commodity until the turn of the twentieth (20th) century. Hell, it took a dozen years after 1890, when Scott Paper began manufacturing for toilet paper to catch on. Surprisingly by today’s standards, Scott Paper company waited twelve years to attach their name to their prostate polishing product, among other business strategies in 1902. Currently, 68% of the world has access to proper sanitation in the form of a toilet. Apparently, investing in sanitation is good for business as ‘A WHO study in 2012 calculated that for every US $1.00 invested in sanitation, there was a return of US $5.50 in lower health costs, more productivity, and fewer premature deaths.’3 So, maybe we should get the other 32% on-board.  We can expect five times the benefit.

Thank you for stopping by

If you have an idea or would like us to explore anything for Fun Fact Friday, let us know at info@mingmag.com.