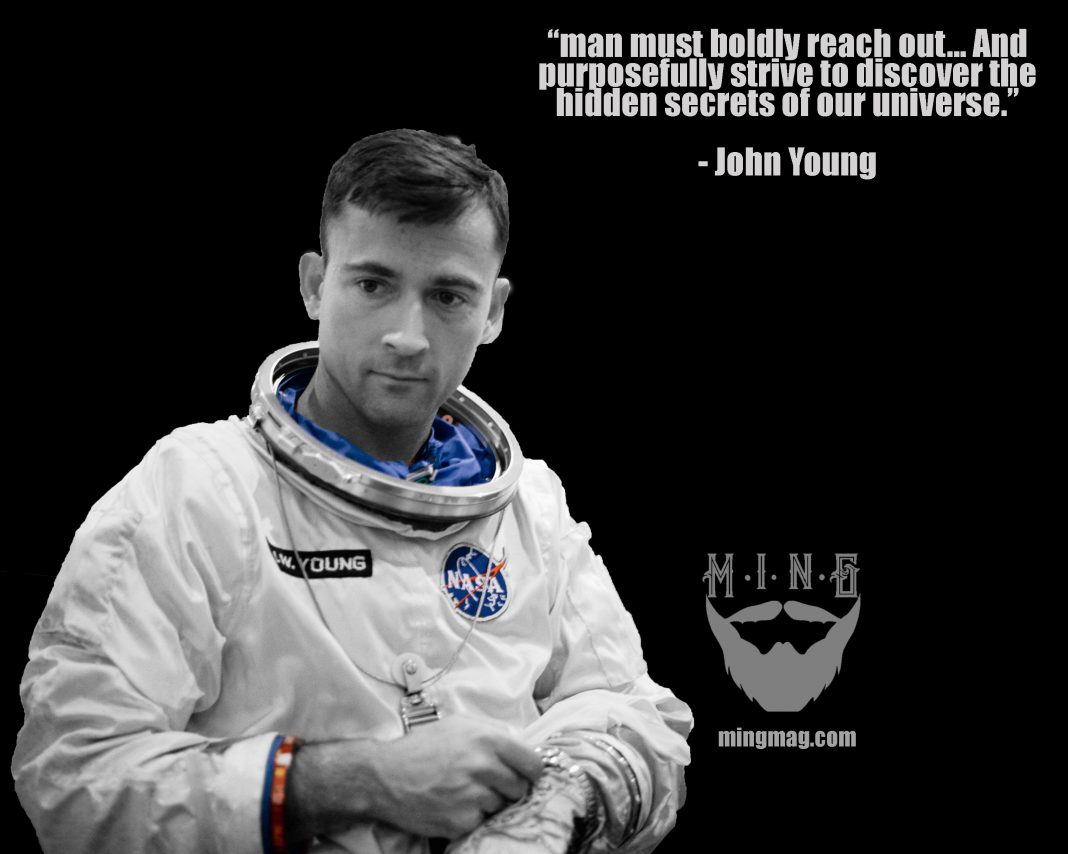 Some people are born destined to achieve greatness. You can’t predict it at birth. It’s often only realized later when the absolute badassery of a single life can truly be appreciated. This is one of those times. This is John Young.

A man who has arguably spent more of his life soaring above this dirt ball of petty strife and disappointment than engaging with it. John Young’s life is best characterized by his actions; that is, he was always reaching for the stars (oh yeah, buckle your space suit, there are more puns where that came from).

Who is John Young?

John Young was born in San Francisco to Will Young, a civil engineer, and his wife: an actual person named “Wanda”. At 18 months, his family left California due to the Great Depression (the economic one, not the feeling you get living in San Francisco). The Young family landed in Georgia, where even a Depression-stricken family from California can still look like a certain real estate mogul to the rest of us peasants.

After taking a quick look around and realizing what Georgia looked like, the Young’s chucked their suitcases again. Legend has it; little John threw his suitcase so high it entered orbit and, upon re-entry, landed in Orlando, Florida. Thus, the family found their new homestead. This was the first (un)documented case of a satellite launch in the U.S. Get it… Case? I’m laughing.

John Young is smarter than you, and he knows it

In 1952, John graduated from Georgia Tech with the highest honors and a BS in Aeronautical Engineering. And not the BS I used to graduate college. But because the job market for a rocket scientist in 1952 was as good as the job market for a rocket scientist in 1952, Young commissioned in the Navy – gross. He completed a tour aboard the USS Laws in the Sea of Japan during the Korean War. Which, I’m told by many Marines and Soldiers, is almost like being in the Korean War.

Young attended Flight Training thereafter and flew helicopters, receiving his aviator wings in 1954. Naturally, John became a fighter pilot. He flew F9F Cougars before switching to the F8U Crusader – a supersonic fighter rumored to cause Vietnamese MiG pilots premature ejections at the sight of it. Which is totally common in young men and not a big deal. In actuality, they just knew their chances of survival were minimal if John Young was flying. Why chance it?

World records and record firsts are what he does

Young’s superior aviation abilities were on full display most of his life. Beginning in 1962, the 31-year-old was working as a test pilot for the Navy when he took the newly developed F-4 Phantom to new heights. Literally. John set the world record for time-to-altitude, taking the F-4 from a standstill to 25,000 meters in 3 minutes and 50 seconds. Young would go on to set 21 FAI records. Three of which remain unbroken. Fellow astronaut Charles Bolden said while other pilots get in the plane, John Young “wears the plane.”

Young piloted Gemini 3 (1965) as part of the NASA Gemini Project after illness grounded the primary, Alan Shepard. This was the first manned flight in the project of only the second manned American space program. Another notable first for Young, he is the first astronaut to sneak a corned beef sandwich into space. The stunt earned him a reprimand from Congress. Later, as a part of Gemini 10 (1966), Young and fellow astronaut Michael Collins performed the first rendezvous of separate vehicles in space, making two spacewalks in the process. As part of the Apollo missions to the moon, Young and the Apollo 10 crew set another world record: highest speed of any manned vehicle, set upon its return trip to earth.

In 1974, NASA appointed Young to be Chief of the Astronaut Office. During the next twenty years, he would become an instrumental component in NASA’s Space Shuttle program. In 1981, he piloted the maiden voyage of the Space Shuttle program, STS-1, aboard the Columbia. If not for the Challenger disaster earlier in 1986, John would’ve made a record seventh launch into space later that year.

Ol’ Johnny boy retired in December of 2004. His career flight statistics stack up as such: more than 15,275 hours flying time in prop-wings, jets, helos, and rocket jets;  more than 9,200 hours in the T-38 supersonic jet trainer; 835 hours in various spacecraft over the course of six space flights, the first to take part in as many space ventures.

A Life on the New Frontier

John Watts Young died January 5 of 2018. The accomplishments left in his wake will streak across the sky like the perfect comet. John saw and experienced things that 99.999999% of us never will. He bet his livelihood on space exploration, a bet that was never guaranteed to preserve one’s life. Because of his expertise, ingenuity, and sheer diamond-hard cojones, humankind is farther expanding into the noblest quest a life can commit to, knowledge. He left behind the politics, the sports, and the traffic, and launched into an abyss. For that, we thank you.

You can read John Young’s obituary here. The man was truly a hero and as manly as they come.  May we all strive to push ourselves as this man did from the very beginning.

Trash Talking Like A Champion And Not A Chump