When you hear about friends being down, you try to help them through it as best you can. So when I heard about my friends being down, I reached out and asked if me being there would help. In fact, it would. We hadn’t seen each other in quite some time. A few years, actually.

“When you come up we can play under the bridge.”

This is how our Misadventures of the MING Man starts off 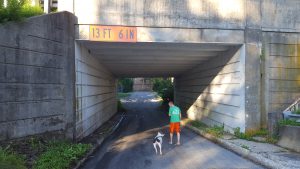 Thomas* and Sandy* both met me on the same day. Thomas’ personality drew me in. He introduced me to his fiance, Sandy, and I introduced them to my wife. They were there for me when my wife became my ex-wife, and I was there for them when they became Mr. & Mrs. But, they moved and eventually and I moved, too. Reconnecting definitely lead to misadventures.

We can play under the bridge

So, flash forward to July 2017 and now they have decided to go their separate ways. I reached out to Sandy and Thomas about coming up to visit and though Sandy wanted to, her mother needed her so it was Thomas and I all day. Alternately, Thomas told me to get my tail to Livingston County*, pronto. “When you come up we can play under the bridge.”

Evidently, I got to Thomas’ house and it was perfect timing because Gionta* (after their favorite NHL player) had to pee. We leashed up Gio and walked him down a service street. The whole time I am asking Tom about this bridge.  “Dirty Mike and the boys aren’t going to be down there, are they?” Gio took a piss on the grass just behind this underpass over the service street.  “Good boy!  Now, get a stick!” He came back with a damn tree branch. Granted, Gio is a big ass pitty, but still.

First, Tom led Gio and me down this pathway off of the service street. Consequently, I was in my sandals and I avoided anything leaves-of-three related.  Fuck that, I swell up. The pathway snaked around on itself as it weaved just beyond a chain-link fence. From there, the freshly carved earthen steps took us down the small hill until we were walking on beach sand.

The sand feels nice on my feet. The stream stirs echoes off of the bridge infrastructure

There was Dan’s* tent right in front of me. I followed Tom around the low-side and my view opened up on this gem within the country. These fuckers built a bar, with benches seating a half dozen or more. The bar had a service counter and sink. Speakers and lights created sensory monoliths in this Buffettesque paradise. There were lines running to the generator so the party could go until “six in the morn’.” They even had a fire pit for obvious reasons. This was all nestled on the shores of a little tributary creek that the puppers loved to play in. It’s just about the best place I’ve ever seen anyone just make up. There were other benches crafted and places around the entertainment zones, like the firepit and near the fishing area.

Libations were to be had

During the evening Thomas took me to his friends’ homes and I was introduced to a contemporary Bohemian village. There were about a half dozen families just hanging out, sharing stories and enjoying some libations. I brought blueberry moonshine up for this special night-bridge ceremony. It was well received. Around midnight I tried to wander back to the bridge and take night shots of the bar. I headed down and got as far as the pathway when I was called back to the party.

0630. “Rise and shine!” Marshall* just walked in and began brewing coffee. Tom and I woke up and got Gio ready for his walk. I brought my camera. We got to the pathway and it was obvious that someone came in late last night. Tom and I followed the path and tire tracks until there was a pick-up in our way.

The truck had a doll on it, which seemed unsettling, but we needed to find out who the hell was there.

The truck belonged to one of two besotted boars resting in the open area between the bridge support and bar. Consequently, there was Cowboy McGraw passed out in the handcrafted chair. Also, Tents Johnson slept in his pop up tent. They looked like their mom would describe them as 26-months-old to her PTA friends. These kids looked young. Turns out, that’s what 21 looks like nowadays. Anyway, the fire was still smoldering and smelled great. They polished off a bunch of alcohol and, when awoken, were quite amused with themselves. We all talked about how it’s a great place and how everyone wanted to keep it that way. Finally, they said they were going to clean up and had things to do later in the day.

“Plans are useless, but planning is indispensable” – Eisenhower

Later, before I left to go home, Dan, Tom and I talked about improvements to the bridge-bar. They are going to install decking, run the wires underground with insulators, get other means of electricity, install a corn-hole game, and display the “house rules” among other ideas. I wish them the best, and I will be stopping by again! The town is idyllic and the townspeople are wonderfully hospitable.

Here’s a gallery of the bar

Do you know of cool places one of our writers could come to and share?  Send us a message at info@mingmag.com.

*Names and locations have been changed to protect privacy.