Home Philosophy The Participation Trophy and Why It Should Die 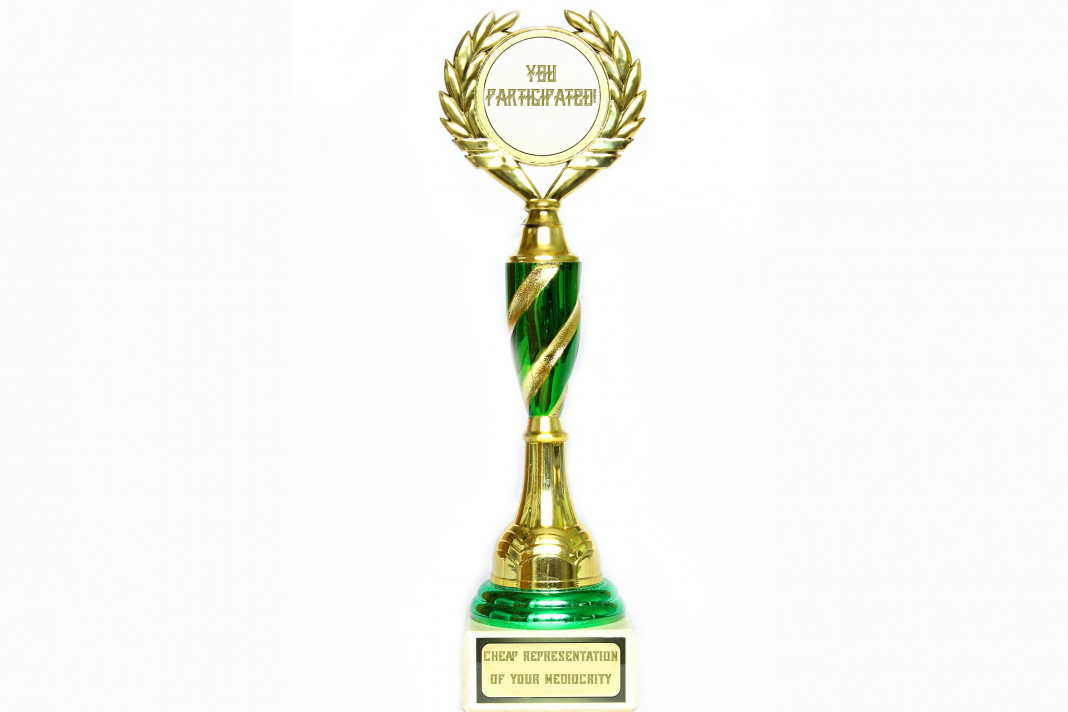 I want you to do me a favor if you can. First, go to your attic and find those dusty boxes that have your belongings from when you were a kid. Go through it and see if you can find your old little league participation trophy or trophies. If you don’t have them because you threw them away or lost them, that’s okay. You can just use your imagination and visualize.

If you found that participation trophy, I want you to look at it. How does it make you feel? Does it fill you with pride? Does it make you reminisce about the old days? Do you think it is just a piece of cheap plastic so the adults can make you feel important? Most of all, it should make you feel some kind of way. Despite your sentiment, walk to the trash can and throw it away. Hear me out before you close this out and say “Eh, fuck this guy.” Participation trophies are bullshit, and I am going to tell you why.

The Participation Trophy is False Entitlement

I remember standing on that field during little league closing ceremonies. The team I was on did not win first. The team that won the first place trophy celebrated. After the team awards came the individual awards like MVP and Sportsmanship (I won the latter a few times…Gross. I don’t even know what that award means. Thanks for not being an asshole?). After the actual individual awards came to the trophy that I hated even then; The Participation “Award.” I remember looking around at the other kids that won nothing and noticed that they were overjoyed with pride. Even then I thought “Why?” It was a pat on the back and said “Thank your parents for spending a shit ton of money. Hope they do the same next year.” As a kid, I did not understand why they handed those hunks of fake marble and cheap plastic out, but now I understand. It was to please our very fragile self-esteem and confidence. To make us feel like we are apart of something. The adults meant well, but they had no idea the absurdity it would cause. It was systematically teaching us that win or lose we all get a trophy, and there are no losers.

Why It Should Die

Unfortunately, life does not see it that way. There are winners and losers in life, and nothing is given. The participation trophy in sports and other competitions has taught us to be entitled as a result. Everyone these days wants an upper-level job straight out of college without paying their dues. That is an adult version of that very trophy they gave to us in little league. It gives kids false expectations of what to expect in adulthood. We are saying the world is unicorns and rainbows and people care about your feelings. We are lying to them, and it needs to stop. If you want a trophy or appreciation, excel in your craft but do not always expect anything in return.

I am a man that offers alternatives and solutions when it comes to things I tend to disagree with.  Instead of giving our kids participation trophies or awards there is an alternative to awarding our children. The alternative is positive reinforcement. If you are a coach of a team, you tell your kids when they lose to play harder and go get it the next time. If they do not receive a trophy, you say that they all did a great job but if they want that MVP or championship trophy that they need to work harder in the off-season to get it. Not “Thanks for playing. Here is this cheap trophy that is going to take up attic space.” Kids do in fact need their confidence and self-esteem boosted because it is so fragile. We want to encourage their interests in various activities and do not want to discourage them in any way. Encouraging them verbally and just being there for them when they win or lose will do wonders for them. They need to hear it, not see it.

Forgive Me If I Seem Ungrateful

Lastly, I know what most of you are all thinking “You are just ungrateful, self-righteous prick. He is probably salty because he was not good enough to win other trophies.” You’d be right with the self-righteous, prick part. No denying that and everyone that knows me knows it. I am not ungrateful though. If anything, I am grateful of those participation trophies. It taught me that some adults were completely full of shit and will lie to you to make you feel better whether you are a child or not. As for the not good enough to win the other trophies, you would actually be right. I was terrible and did not deserve them at all. Does that sound salty? That would be a no. Why would you give a kid something that is going to fill his or her head with entitlement and then sit in a shoe box for 30 years? So, yes I am disturbed by this, and I have a right to be. Your kids probably hate it too. If you don’t believe me, ask them. They won’t lie to you as we lie to them. It is not just a nice thing to do. It is stupid, so stop it.

Overreaction to Week 7 in the NFL: In to the Mist-ic