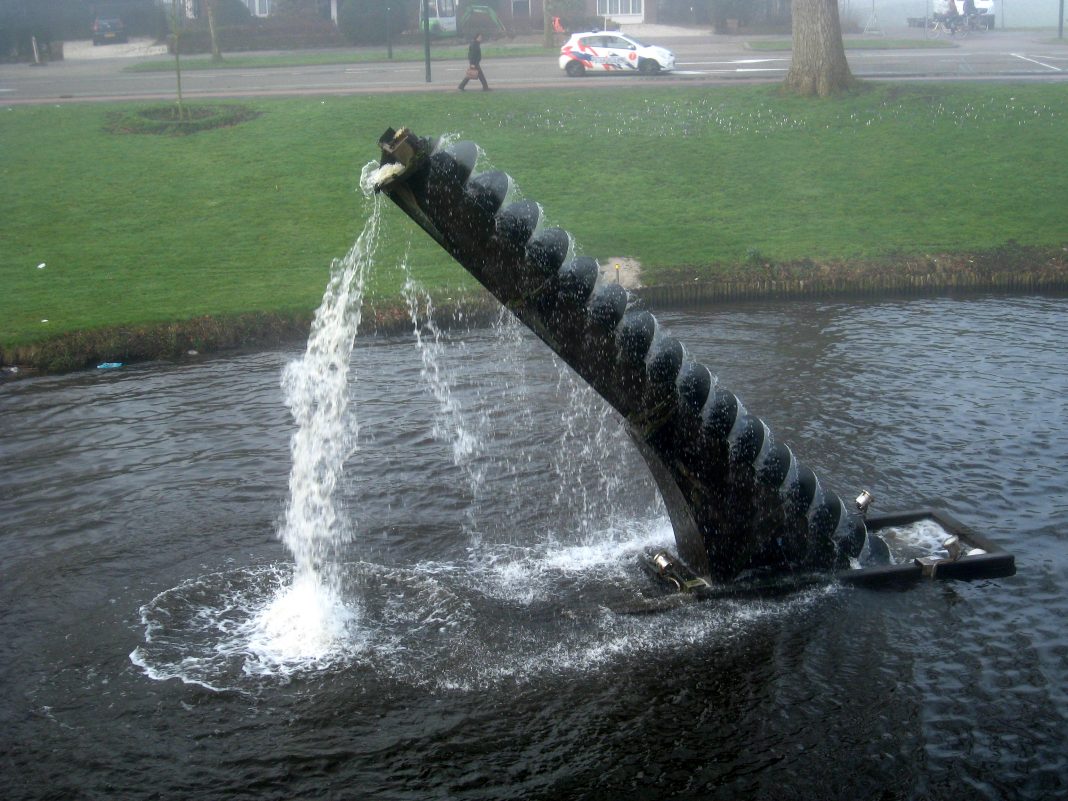 In Water in America, Part I, I discussed how to implement a large scale, flood-and-drought water solution.  Now that the water in the aqueducts has made it to the Continental Divide, it’s time to “Science the shit out of this,” with the help of the Archimedes Screw.

We could run the aqueducts all the way to places like the Sultan Sea in California, or Las Vegas, Nevada.  And, with an aqueduct system long enough, there should be relatively little in the way of getting the water to these lands.  However, the pipes only go downward and need a cost-effective way of bringing the water above. Enter the Archimedes Screw.

Getting the whole thing up with the Archimedes Screw:

Using Vitruvius’ formula, our water lies no more than a half-mile underground.  Again, this is at 1500 miles.  But, we aren’t going 1500 miles, so at each of the points-of-entry, engineers will need to figure out that math.  Have at it, USACE and friends.

I picked the Continental Divide because of the ability to stack watermill-generators on the backside of the mountains.  Even with the amount of water the Archimedes Screw can put out (not a massive amount compared to just a hole at the bottom of a water basin), the watermills will turn and produce electricity for local residents.  Hopefully, the reach of the power output increases beyond local jurisdictions.  That is dependent on the scale of the generators and watermills.  Main branches of the pipeline would produce more water.

Some of this power could be diverted, not as electricity, but as other power.  It will take a lot of energy to turn the screw.  If we attach watermills to the driving mechanism, much like a U-joint attaches the axle and steering column in a vehicle, we shouldn’t have an issue with transferring the energy into the rotational force needed for the three and a quarter mile (at most) long Archimedes Screw.

Ideally, the screw would breach the surface just west of the apex of the Continental Divide.  Consequently, the newly liberated water would fall down the western sides of the Rockies, creating new waterways to thirsty water tables.  Winding along the routes, these man-made rivers would have watermills placed on buoyancy lifts; as the water rises and lifts, so too, does the watermill.  Keeping these units operational for as many seconds in a years-worth of seconds is important; which is why the lifts are needed.  Not every day will rain fall along the Mississippi River Basin and get all the way to the watermills.

This water will eventually make its way to places like the Sultan Sea or Southwestern Arizona.

These are passive systems (waiting for the water to empty into an aqueduct drain, and lifts that follow the level of water) designed to be monitored easily.  A 1,500-mile long linear pipeline costing $3,000,000,000 shows us that the whole project could cost a lot of money.  With designs that utilize branch-networking, the costs can be reduced.  In essence, the main pipeline would flow for hundreds of miles to a Central Lift Point (CLP).  Once at the CLP, many Archimedes screw systems will lift the water to their destinations further up the mountains reducing the need for so many pipelines throughout the eastern network.

Do the costs outweigh the benefits:

I believe so.  As an example, even if the whole project costs one-trillion dollars, one-hundred million taxpayers would have to ante up $10,000 each.  We could possibly drop that amount by as much as 16%. So, for $10,000 over the course of 20 or so years, the project can be funded.  That’s $500 a year to keep insurance rates lower, prevent loss of property, and most importantly it prevents the loss of lifestyle and ultimately life.  Also, every commercial, industrial, farm, education, and other entities continue to operate during a time when, historically, water would have flooded them closed.

This problem seems like a no-brainer to tackle.  These are my ideas on how to rectify this issue.  If I’ve missed anything, let me know.  I want to get the momentum pushing forward to lay down some water-pipes.

Check out others’ ideas on flood control: