Home Sports The Way of the Fight: My First Fight Experience 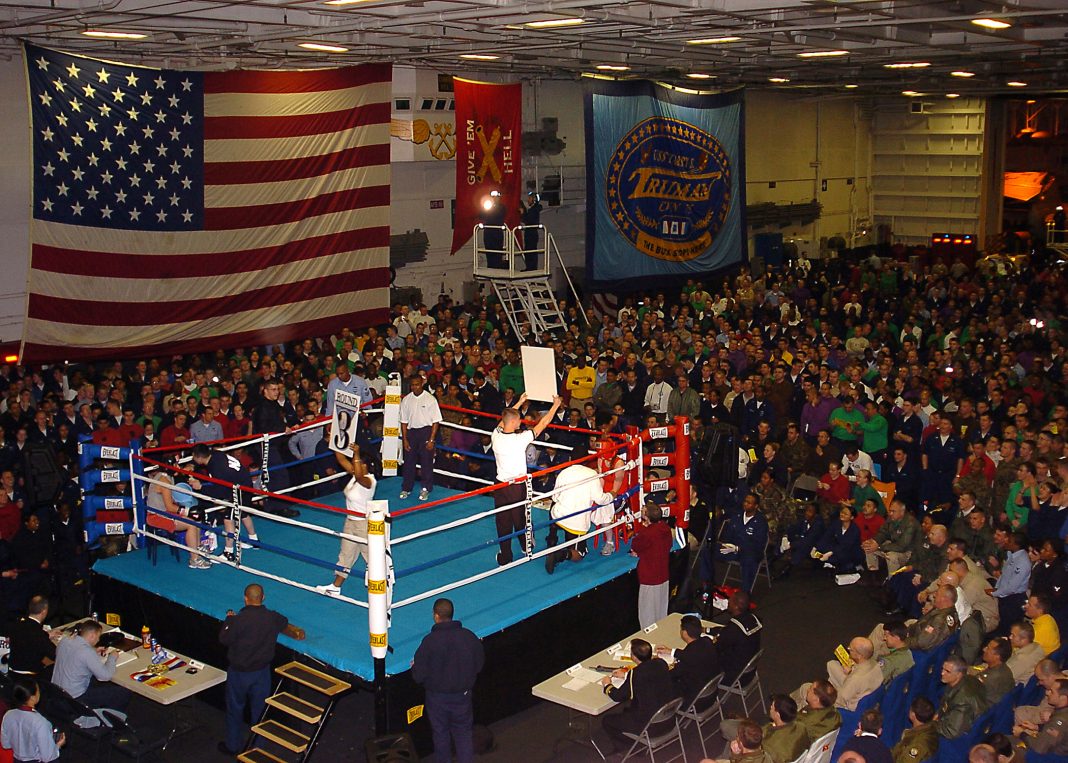 After training for over four years, I finally did it. I stepped inside an actual ring and traded blows at full speed with an opponent. You’re probably asking; “Wait, after all of those articles about fighting, you don’t even have experience?!” You would be wrong to assume I do not know what I am talking about. In the last four years, I have rolled and sparred with some of the best the gym has to offer. Training with those killers helped me learn a set of skills that I can share with the public. Those same skills prepared me for my moment in the ring.

Wake up and Leave

The morning of the fight was nerve-racking. I experienced butterflies as if I were a kid about to go on his first date. Naturally, those butterflies turned into a little doubt. “How do I tell my friends and family if I lose? What will they think of me?” Having doubt is common. I am human after all. My wife asked me if I was nervous and, lying through my teeth, I told her I wasn’t. The nerves subsided as we backed out of the driveway of our newly purchased home; at least for a little while. I gave myself the “stop being a pussy. You can do this. You trained for four years to get to this moment” pep talk. My wife was talking to me and my daughter but the conversation was drowned out; I was going over my game plan in my head.

The gym I fought at is a well-known place located in Elkridge, MD called Crazy 88 Mixed Martial Arts. If you live in the Elkridge area, I suggest you check it out. Great group of people there. As I walked inside, I immediately caught that MMA gym smell; the mix of blood, sweat, and possibly tears. I met up with some of the other Ivey League guys that were also fighting the same day. We walked to the left, and I saw the imposing structure, the ring. The ring looked smaller than it usually does on TV.

The adrenaline started to pump through my body as I set my gear down to get the weigh-in. I was weighed in by a true warrior named Aung La Nsang, a Burmese badass that will shortly be fighting for ONE FC’s Middleweight Championship. The scale read 246 lbs, and it made me ecstatic. I haven’t been under 250 since my active duty days. After weigh-ins we started to chat, warm-up, and stretch.

After an hour of weigh-ins and warm-ups, it was time to get down to business. They called my name and my opponent’s name and we did the classic pre-fight stare down. He did not seem nervous, and it was as if I was staring at a statue. I did not know anything about him other than he is a big guy but I had a huge reach advantage. He had to be a solid 250 lbs. After the stare downs, we moved into another room so that we could warm up some more and go through our game plan.

As the fight started, you could hear the cheers and intros from the fans and other fighters in the stands. The feeling was as if I were in a UFC or GLORY event. Three of my friends fought before I did and I barely got to watch them. As it got closer to my time, the nerves and bad thoughts started to set back in. Before I could give myself another pep talk, they called my name. The walk to the ring was a blur; I only remember hearing the applause.

We traded blows for the first minute, and he started to throw his leg kicks which were the theme of the fight. He chopped at my legs and I threw punches to his face. Were they effective? Not really sure, he was tough and showed no emotion. I didn’t show him emotion or pain until he swept me. “Fuck. That was embarrassing.” The fight had just begun, and I was already on my ass. At least I wasn’t put there by a kick or punch to the head. The ref ensured I was ok and I gave him the slight head nod that I was good. We went back at it.  Then the bell sounded, and the round was over.

Round two was more of the same. He would throw leg kicks and try to get me in the corner and I would throw flurries. I planned to establish the center and to take advantage of my reach. I planned to stay calm; knowing if I kept up the flurries I would fatigue quickly. In the heat of battle, my plan went to shit. His leg kicks caused me to mentally change to survival mode. The bell sounded; which got me some much-needed rest. My corner was telling me what to do. I was frustrated because I already knew what to do but was incapable of doing it due to fatigue. My opponent looked calm and ready (to drop bombs! Sorry, Eminem moment). I quickly discovered that sixty seconds is not a long time to regain your breath. Before I knew it, it was time for the final round.

The final round was no different than the last two except I was exhausted. He did the same exact thing, trying to cut the tree down. At this point, I could not feel my legs anymore, so he was going to have to kick them off. On my end, I was throwing punches and using my jab, but they had no real power. Eventually, he caught me again with a leg kick and this time I felt it run up my nerves in the back of my thigh. I thought “one more leg kick, and I am falling again.” That is exactly what he did, and I fell grabbing the ropes. After rising to my feet, the bell sounded.

Check out my fight!

I exited the ring about as disappointed as a person can get. I knew I was better than I showcased in the ring. Anger set in because my body fatigued way too early. I started to make excuses. “My shin guards are too bulky, I haven’t eaten much, I did not warm up all that great, I was sore from moving to my new house.” “Blah, blah, blah.” I did what I hate doing, and that is making excuses. I just sucked, and there is no other way around it. My cardio was garbage, and so was my defense.

My coaches, friends, and even some audience members told me that I did a good job and there was no clear winner. I am not sure if that is entirely true, but maybe they saw something different. Coach Danny Ives and Coach Scott gave me helpful advice about what I did right and what I did wrong and what to work on. I hung my head for a while until I saw my wife who told me she was proud of me. That made me feel better. It made me realize that I survived and had the balls to do it. I thanked Coaches Aung, Danny, and Scott for allowing me to fight. For some strange reason, I couldn’t wait to do it again.

The day after the fight I was sore and disappointed. I started to gain my confidence back because I knew I was better than what I showed. Training for the next one will be more rigorous, and I’ll focus on my technique. I learned so much about the sport and myself in that short six minutes. I learned that I could handle adversity through the most intense situation. Many of us have never had to face the physical and mental adversity of a fight and most never will, but I did. I am itching to get back in the lab to sharpen my skills and to work on the areas where I am lacking.

Lastly, I want to thank my opponent, John Sung. He is a hell of a fighter and one tough guy. Hopefully, we can do it again. John if you are somehow reading this; thanks, man. Look for me to be back in the ring. I’ll let you know when that happens. Until then, look out for more MING content! Oss!

Aaron Nye: IT, Humor, and Some All Around Good Information