Since the discovery of fire, creation has always sought out bigger and better ways to harness its power and apply it towards different intentions. Often for survival, others for war, and for some, entertainment. With the consecutive discovery of gunpowder (or modernly “black powder”), the firearm was born, thus fulfilling all of these purposes. The firearm can be used for hunting, battle, or sport, and what’s a more iconic representation of guns than the rifle? 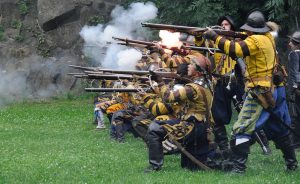 These are breech-loaded, or loaded from the end of the barrel, and often smooth-bore, up until the mid-1800’s. For this type, the three most popular means of ignition are matchlock, flintlock, and caplock. The most primitive of these styles is the matchlock. It consists of an apparatus towards the back of the barrel where a piece of rope is clamped. When it’s ready to fire, the user lights the end of his rope, and the trigger brings the end of the rope to the flash-pan, which was an opening into the chamber of the barrel. The second type of this category was the flint lock. This type creates the same ignition that the matchlock can achieve, but by a more efficient means of providing that ignition, through a spark caused by friction instead of a lit piece of rope.

The caplock, or the “percussion cap” is the last popular muzzle-loading technique. This style replaced the flintlock and became heavily popular in the 1800’s. This mechanism consists of a hammer that hits a primer that has a path straight into the chamber of the barrel. This prevents the initial puff of smoke that the flintlock had before it fired. This is the most common style of muzzle-loader that we use today, mostly for hunting and sport. Good examples of prominent muzzle-loader designs include the Kentucky Long-rifle, the Brown Bess, and the Great Plains Rifle. 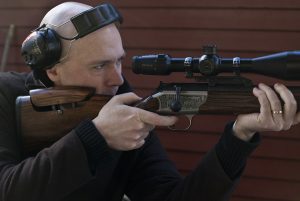 Created in 1824, the bolt-action rifle has gained a reputation as one of the most reliable, accurate systems for cartridge firearms to this very day. They encompass every caliber from the .22 rimfire all the way up to the gloriously impractical .950. This mechanism consists of an internal or external magazine and a curved or straight bolt action that feeds each bullet into the chamber of the barrel for firing. The cartridges are fed from the top while the bolt is open. This allows each cartridge to be fed, or to employ a clip of some sort. Hunting, battle, and competition are all great, widely popular uses of this rifle. The Type 38 Arisaka, the M48 Mauser, the M1903 Springfield, and the M1917 Enfield are all examples of widely prominent bolt-action rifles. 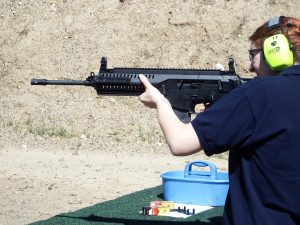 It’s hard to find a gun owner in America today that doesn’t own at least one semi-automatic rifle of some sort. This type of rifle cycles each cartridge for firing, but through different means than the bolt-action. Most semi-automatic rifles use either gas-operated or strictly blowback systems for cycling. They can follow the standard design other rifles have followed with the stock/mag/barrel setup. On the contrary, they can also branch towards a bullpup design, with a mag+stock/barrel setup. Semi-automatic rifles are frequently used for competition or police/military implementations; but, with a longer barrel, they’re often used for hunting and pest control as well. Great examples of prominent semi-automatic rifles include: the Ruger 10/22, various models of Armalite/Armalite-type Rifles (AR), the M1 Garand, and the Geweher 43.

Want to learn more about guns? Stay tuned for more articles on them, or you can head on over to Pew Pew Tactical for in-depth explanations on guns, how they work, and safety when operating them.

“This is my Boomstick” – Shotgun Edition

The Three P’s: Essential Fundamentals for a Successful Harvest