Home Outdoors Camping Camping Hacks: Accomplish Anything With A Rope 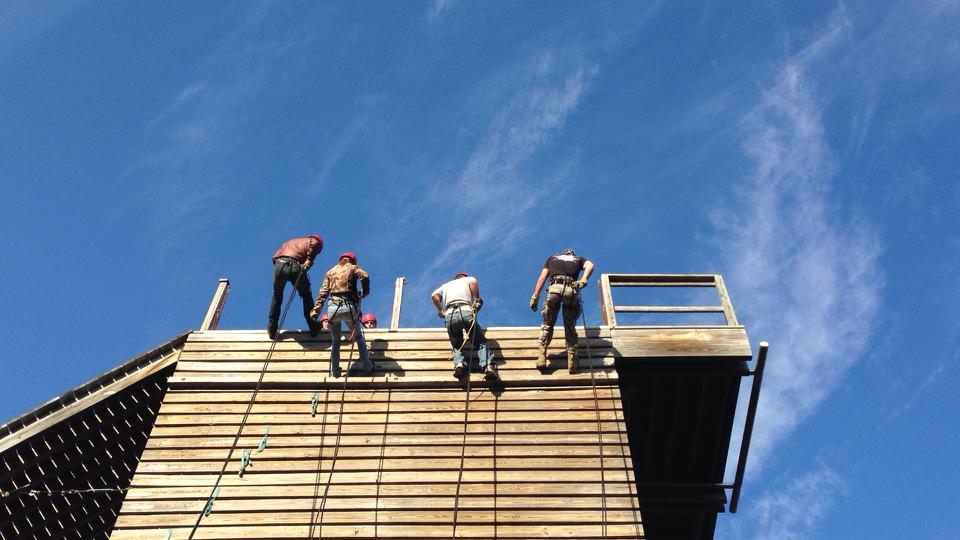 Does everyone remember that scene from The Boondock Saints? You know, the one where Murphy is trying to convince Conner the necessity of rope for their next hit? Then it turns out that despite not knowing what use it could serve, it plays a huge role in their success? Well, that’s how this article is going to go.

Allow Me To … Rope You In

So I have had a unique experience that has led me to the rationale in this article of rope. In college, I was able to participate in a highly adaptive and skilled sub-unit of the Norwich University Army ROTC program. This unit, aptly dubbed the “Mountain and Cold Weather Company” (abbreviated MCW) specialized in planning, maneuvering and thriving in adverse conditions – namely the cold mountainous environment synonymous with our state of Vermont. At one time, a sub-unit of this sub-unit, the Rescue Team, was the only deployable college unit in the nation. They would assist local Search and Rescue assets with recovery missions. In 2012, they were dispatched to aid in Hurricane Sandy relief efforts.

In this unit, my love for the outdoors and backpacking flourished (a camping article from the beginning of the year can be attributed greatly to MCW). When it came to extended stays on the mountain, it was as if the starting gun for an Olympic event went off as we all tried to find the most efficient, versatile, and useful commodities to show off to our buddies and brag about how much more comfortable we were. Looking back, it was always some contraption that REI had developed that was going to make doing the Appalachian Trail a cake walk (they never worked that way). If you ask me now what I take on every military exercise, I’d tell you a rope.

Now, this is where I may lose some of you. I know what you’re thinking. You’re imagining a large laid rope like the ones you climbed in gym class pouring out of my ruck. Some of you who are smarter than others are probably seeing a lengthy coiled up climbing rope around my back. The former group isn’t wrong, but they aren’t necessarily correct either. A rope is only useful if one knows how to manipulate it to serve a purpose (Check out Aaron’s article for Knots 101). While I may have a climbing rope and other high-angle hardware in case of the unexpected when I’m out on the trail, the one thing I have on me no matter the setting is a chord.

Paracord: Not Just for the Old Drop Zone

Paracord, or 550 cord as it is commonly referred to, is becoming very popular outside the military and survivalist community, and for good reason. There are six different classes of paracord but the most common, what you call 550 cord, is class III. To meet military specifications, the manufacturer must comply with C-5040H. This basically just sets standards for how many inner strands need to be inside the sheath of the rope (we call these the “guts”). Class III cord has a static (non-moving) breaking strength of 550 pounds. Class IV, however, has a stronger static rating of around 750 pounds.

550 cord is useful because it allows you versatility. Want to hang a lamp in your tent? Weave some 550 between tent poles and tie your lamp up. Shoelaces fray? Nothing a little 550 can’t fix. Tie a clothesline between two trees and dry out your clothes. Tie down some tarp after you’ve scraped it over a line you’ve strung for a cozy A-frame. It doesn’t add much weight and has a reasonable length and tucks away easy. You can even coil them into bracelets with as much as ten feet of cord!

Or rope is dope? Hemp? I don’t know, let’s move on. While 550 chord is much more versatile and easily packed, there’s still a place for a good ol’ fashioned climbing rope. The disadvantages are obvious; more weight requires some technical ability. And it is awkward to carry. But with some proper practice, you’ll see that a simple climbing rope and some additional mountaineering equipment can make life much easier, make hikes a lot more fun, and, at times, offer some lifesaving capabilities. First, let’s understand the basics of what a rope is. The most common climbing rope is a kernmantle rope. Like 550 chord, these ropes have an interior that comprises most of the rope’s strength (the “kern”/”core”). The woven exterior (the “mantle”/”sheath”) is weaker than the core but provides it with abrasion protection.

Now, working with a larger rope does require a bit of technical knowledge. Practicing simple knots will enable you to accomplish much more than you may think. To get you started, visit animatedknots.com and learn some basics knots like the end of the line bowline, figure eight and all its variants plus hitches such as the girth hitch, clove hitch, and prussik. Knowing those knots and hitches and their purpose is a pretty good way to set yourself up for success. With that knowledge, you’ll be able to do things like rappel, set up a zip line, make an expedient litter carry in case of injury, lower equipment and people, and, with the proper application of hard gear such as carabiners and pulleys, create mechanical advantage to haul and tension with hundreds of pounds more strength than you otherwise would be able to if you just pulled hand-over-hand.

Climbing ropes have two basic classifications: Dynamic and Static. Dynamic ropes offer an elongated stretch under tension to protect individuals from falls. Similar in style to a bungee rope. However, the UIAA (French for “International Climbing and Mountaineering Federation) has regulated that the amount of stretch in a dynamic rope should not exceed 40% of the length of the rope. This is to make sure your rope doesn’t stretch so much that you still end up hitting the ground. The second type of rope, static, is the opposite. These ropes offer little stretch, no greater than 8% by UIAA standards. The simple determination for which rope you should use is asking yourself if a life will be on the rope. If yes, go with dynamic, just to be sure. There are of course exceptions like using a static rope for a rope bridge with a dynamic belay. For simplicity and safety purposes, dynamic is always a safe bet.

At the End of My Rope

Using these techniques make exploring hard to reach places easier, can help you set up field expedient shelters, and move large equipment up or down vertical faces with ease. It’s pretty simple folks, less is more. The more versatile you can make a single piece of equipment, the more sustaining you will be; whether it is a field training exercise or a weekend hike. Rope in the form of 550 chord and climbing ropes offer multiple uses and can really make a difference in your next adventure. I love rope.

I wrote this to spark interest in mountaineering and add another useful item to your toolbox. That being said, I’ve given you just enough information to…hang yourself with. The reality is if you’re going to put yours or someone else’s life on the line, or rope, it requires a more mastery level understanding of physics and the effects of various forces on the rope and load. From simple things like knowing the breaking strength of a rope and placing protection if draped over sharp edges, to calculating the force of a fall on a person for both static and dynamic ropes based on the amount of rope in the system and distance of the fall.

Even if 550 chord has a static breaking strength of 550lbs, if that load was swinging it would take less than 120lbs to snap! Make sure you know or have someone who knows what they’re doing before you ever attempt to go vertical. But don’t let this sway you from learning and practicing what is one of the most rewarding outdoor activities.

Camping Checklist: What You Should Bring