Basic knots and knot tying is an ancient art which we’ve largely neglected in the modern era. The whole concept of cordage, how to procure or manufacture it, how to employ it, etc. is a basic survival skill that too many men overlook. You can start a fire, you can pitch a tent, but can you lash together sticks for a lean-to using twine you spun yourself out of fibers from yucca leaves? First things first, you need to know what to do with cordage before you bother learning to make it. 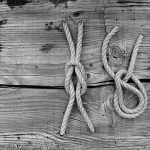 If you don’t spend a lot of time around boats or fishing, rock climbing/ rappelling, or some kind of rope centric profession or hobby, odds are you know how to tie three or four knots, at best. That’s not enough knots. While a half hitch, a square knot, and your shoelaces can come in handy, they can’t do the work of other well-known and functional knots. Yes, knot tying takes practice, but how many times have you sat at the DMV waiting for your number to come up, staring at the freaks who seem to spend all day there? Drop a one-foot length of paracord in your pocket and read on.

First, there are some words you need to know so that the instructions make more sense. When I talk about a running end or a loop, it’s in your best interest to know what that means.

Since this is a 101 article, we’re not going to bother with the terms we won’t use until the next installment. Rope management is one such thing. Suffice it to say, if you’re new at this, you’ll have your hands full with just those.

An overhand knot is an extremely simple knot. In fact, if you know nothing about ropes or knots, you know how to tie this knot. It is usually used as a stopper. You would tie it at the end of a rope or string to keep something from sliding off the end, or to keep the rope from slipping out of a grommet. 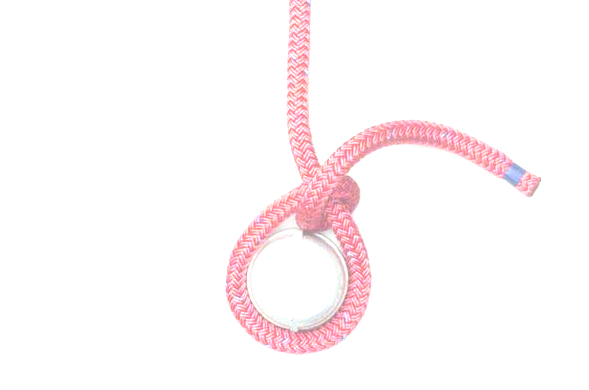 A half hitch is essentially an overhand knot that’s wrapped around something. It’s so simple it only takes a single image to understand. As stated above, hitches are knots that close around things. This one is used to hitch something to a post or tree (or anything else the rope will wrap once around). It’s usually a temporary hitch and it’s easy to untie. It’s also easy to pull loose which is why it’s usually temporary. To make it more permanent you double it up which gives you the clove hitch (below). Another use for it is to add additional security to other knots such as the bowline (which comes later).

A more complex hitch that cinches tighter when placed under load. It is either used to hitch one item to another or as a component of another knot. For instance, adding a clove hitch to a bowline makes it a nautical bowline (which is in the next lesson). The clove hitch is not chiral in that you can tie it in either direction.

A half knot is primarily a starter for other knots such as the square knot or the bow. It’s generally used as a type of loose hitch when used on its own. It requires two running ends.

You would ordinarily do this with a rope wrapped around an object.

The half knot is the basis of the square knot. A square knot (also called reef knot) is simply two half knots tied opposite each other. It can be used to join two ropes together without sacrificing too much strength. It can also be used to make sure whatever you’re fastening doesn’t come loose. If you pay attention, you’ll notice that this is the basis of tying your shoes.

If you do it wrong you’ve made a granny knot which is completely useless. You’ll know when you put it under load because the knot will come undone readily.

This is the most complex, but also one of the most useful knots we’ll cover in this lesson. It’s pronounced Bow-Lun instead of Bow-Line, especially in nautical circles. Be aware or you’ll be called a noob. This is the knot you want to tie to keep a loop in a rope that will maintain its size and shape under load. You can use it to tie the end of a yo-yo string, a literal bowline, fasten clasps to a dog or horse lead, hold carabiners, or just about anything that requires a static loop. This is an important knot to practice.

Evolution of A Fraud: The Colin Kaepernick Story