Home Culture Culinary The Learning Man’s Chef: Get Off Your Ass and Start Cooking 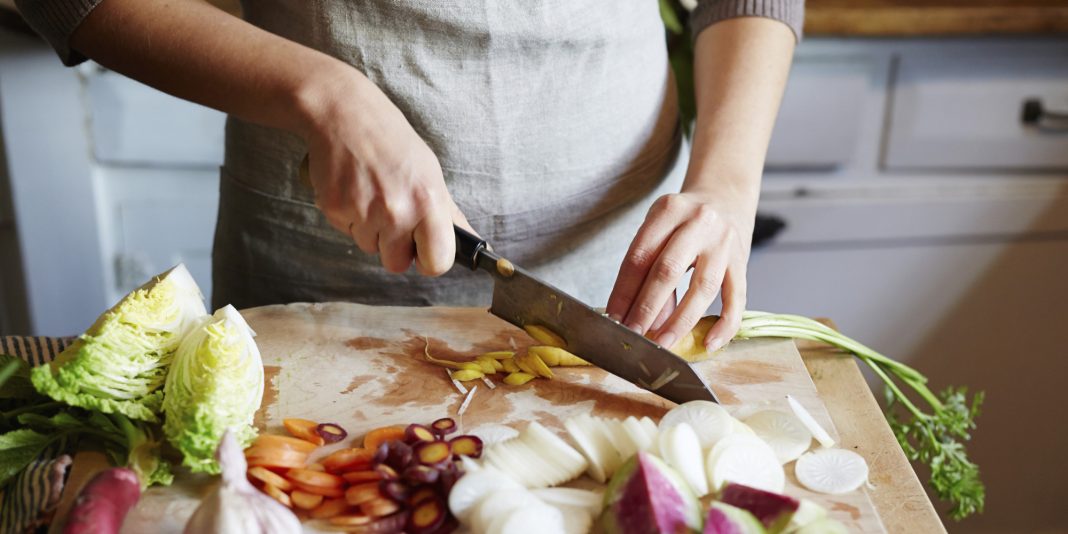 Since man invented fire, the art of cooking has been a tool of the showoff. There’s the guy who figured out before cooties didn’t exist that expertise in the kitchen is a total turn-on. Or the girl whose mom always cooked and thus taught her the supposed “way to a man’s heart” spiel. Now, for many men at least, cooking is something that we don’t fully grasp or want to. Especially if we are in a relationship and can remember our parents being that couple where mom always had dinner ready.

While nothing is wrong with all of that, there certainly isn’t a problem with anyone learning how to cook. Besides, in today’s world of everything else being so expensive, the ability to expand your food at home is a great thing to have. Such is the case with me. I’ve always considered myself self-sufficient; cooking has never been a strong suit, though. Recently, my lifestyle has changed where most of my work occurs after typical dinner time, so I’ve started to learn how to cook.

Because of this, I’m passing my “tidbits’ on to you. While I’m not a professionally trained chef, I consider that to be the best part. I’m an average guy who just wants to enjoy his meal without having to go to a restaurant.  Plus, there’s something fulfilling about creating this plateful of flavor. So, I’m going to do my best once a week to bring you a different method/recipe/style I have learned. Hopefully, it helps you with your lifestyle, or maybe gives you an idea of how to impress your significant other (ladies, definitely pass these off to your guy or use them yourself). Without further ado, here is the first thing(s) I’ve self-learned about cooking: “The Four ‘S’s.”

The easiest thing to agree on in food is that everyone hates bland food. The easiest way to fix bland food? Add some spice! This doesn’t mean overdo it with peppers or chilies or hot sauce. It can be as simple as adding some salt, garlic, or even something sweet like cinnamon. Just remember, some spices have a harsher bite than others so do a little bit of research before going hard. Also, if you do end up adding too much spice, a little bit of sugar helps to take that away.

Another important thing about spice is that some spices pair with certain foods better than others. For instance, please don’t ever add spice to a regular pasta dish. We’ll get to that more shortly. Adding cumin to a piece of steak is not only sacrilege but plain stupid. Go with some garlic or some pepper instead. Most cuts of chicken will transform with just about any type of spice, but it’s always about moderation. As for ground up meat of any kind, those are a blank canvas that you are free to do what you wish with.

A great substitute, or even compliment, for spice, is a good sauce. If you’re more into BBQ sauce, then just add a little salt and pepper to your steak or chicken. Not to mention, a good chili lime sauce, or specialty hot sauce, can really take your tacos or Tex-Mex to the next level. It may sound surprising, but a good salad dressing can be utilized as a solid sauce for your chicken as well. However, the best and easiest way to use sauce is, of course, with any pasta dish.

From the simple marinara or alfredo to a decadent wine or vodka sauce, cooking pasta is all about the sauce. While sauce itself isn’t necessary, it too can be a blank canvas to add some spice. Any marinara or vodka sauce can easily be adjusted with some heat thanks to chili peppers. Meanwhile, alfredo sauce is a little bit more delicate because of how important the consistency is. Too much cream makes it difficult to eat the entire meal while not enough makes it seem too soupy.

Now, if you’re anything like I was, you think sides are a waste of time. However, the sides can be crucial to the flavor of your actual meal. Think about it. Sure, that bourbon glazed filet mignon was magical, but those garlic mashed potatoes made it heavenly. And while many of us don’t want that healthy green crap, it’s a great compliment to your chicken or pasta. If nothing else, think of your side as a “pallet cleanser.” It’s a way to help you enjoy that next bite as much as your first.

The biggest difficulty in picking a side is that it’s a lot tougher to pair with your meal rather than just deciding what you want to actually eat. Most people want to go vegetable because it makes a more “complete” meal. While that’s not a bad route to go, it’s not always necessary. A side of rice for a seafood dish works fine, much like a small bowl of mac and cheese for a chicken or sausage meal does. However, all of this makes our fourth and final “S” the toughest one.

Eating is just like any other vice we have in society. Whether it’s gambling, drinking, exercising, et al., moderation is key. This means making sure your main dish isn’t too large to not have a side, while also making sure your side(s) doesn’t overwhelm your main dish. Prime example, the dinner I made the other night. Been wanting to have some smoked sausage with rice for a while. However, I made so much rice (and added green beans as an attempt to be healthy) that those two sides severely overwhelmed the sausage.

The most important thing to remember when taking portion size into account is how much you can actually eat. It’s not a bad thing to have leftovers, especially if you don’t feel like cooking three meals a day, or you know you’re going to be busy the next day at work. Studies have said that the full meal, once chewed, should be no bigger than a loose fist; This is because our stomachs are generally about that size. Obviously, this rarely happens, especially in America; as long as you don’t overdo it, you’ll have a great meal.

As I said, in the coming posts I’ll talk about the new things I have learned and how they can help you. Topics will range from the best way to cook certain meats, recipes for some of my favorite meals, and even the best food for your next party. For now, go out and conquer fire!

Jessica Jones Season 2 Suffers From Too Much Character Development