Finally, the moment we have all been waiting for. The moment where the big bag Mad Titan, Thanos graces us with his presence on screen to take on Earth’s Mightiest Heroes in Infinity War. 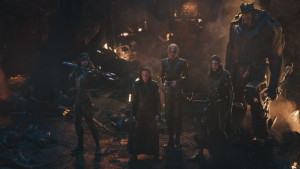 Before I begin the Infinity War preview, know that I will try to spoil as little as possible about this film, but no promises. Put a pin in this review and come back after you have seen it if you are worried.

The Russo Brothers waste no time introducing Thanos. From the very first scene, we get a glimpse of Thanos’ ruthlessness by the trail of bodies left lying at his feet. We also get a demonstration of the sheer power Thanos possesses when faced one-on-one against The Incredible Hulk. At this point in the film, Thanos is checking my boxes in terms of great villains.

So many Avengers, so Little Time

The pacing of this film was one of my biggest concerns coming into it. With so many big-name actors/characters attached to one project, it’s natural for one to wonder how the writers were going to give everybody a decent amount of screen time; while still telling a compellingly cohesive story. 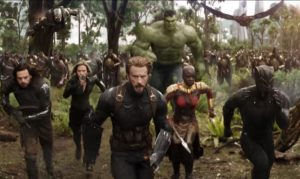 Somehow, someway, Infinity War pulled it off. I would say that ninety percent of our heroes are on screen long enough to have a meaningful impact on the storyline. But at the same time, not so long that you feel like one hero is more important than the other.

However, I am disappointed in how The Hulk is portrayed in this film. The Hulk and Bruce Banner are relegated to being a running joke in this movie. According to Marvel Exec Kevin Feige, there’s a story arc to explore with The Hulk and Bruce Banner in upcoming films. I just hope those two characters get shown in a bad ass light that rivals Bruce’s “I’m always angry” scene in the first Avengers movie.

Overall, the Russo Brothers shared the wealth when it came to screen time. The star of this film is clearly Thanos, though. This movie isn’t about the Avengers trying to stop Thanos. It’s about going on a journey with Thanos as he embarks on a quest to track down all six Infinity Stones. The Avengers just happened to be there for it.

If you have read any of my reviews before you have seen me ask this question in past articles. This time the question is special. Marvel has been teasing us in the nether-region with Thanos dating back to 2012. We saw him in the first post-credit scene in Avengers 1. Six years later and he’s finally here. With so much hype surrounding a comic book villain, anything less than near-perfection would be a disappointment in a lot of people’s eyes.

Thanos is certainly one of the better villains the Marvel Cinematic Universe has had to offer. His altruistic motivation to wipe out half of humanity was laughable to me, though. Without getting into too much, there is a certain scene where Thanos is having a conversation about why he wants to wipe half of humanity from existence. Thanos cites that the universe is “finite”, it’s resources are “finite”, and certain planets suffering from humanitarian issues like famine would benefit the most if there were less living beings in the universe. 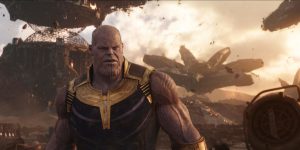 To some degree, Thanos has a point. But on the flip side of that coin, there’s this stone that lets the possessor reshape reality into whatever he or she desires. With that being said, if Thanos really wants to fix the issues he cited, couldn’t he do so with a snap of his finger and keep the population of the universe as is?

In theory, the answer would be yes, but the thing about Thanos is, he wanted to play God more so than he wanted to help people (Shout out to my buddy Wade Groot for pointing that out). Thanos got a kick out of taking lives. There’s a scene where Thanos crushes a certain character’s neck with one hand, and he does it with a smile on his face. Thanos is a genocidal maniac who’s too delusional to realize it, and he would make for a much more compelling villain if he would just embrace it.

As good as Thanos is as a villain, the MCU has better villains out there to offer in previous films. The most recent one being Killmonger. But that could all change come 2019 when part two of Infinity War comes out. Wait on it.

Check out my podcast Almost First

If you enjoyed reading my review, then you’re guaranteed to love my podcast Almost First. On the show, fellow guest host and I talk everything from movies, comic books, tv shows, and anime. So be the first to listen to Almost First!

Overreaction to Week 10: Back After an Unnecessary Bye Week

Men and Mental Aging: There Is Something You Can Do About It