Now that we have covered what you need in You Should Be Brewing Beer Because Beer is Amazing, Pt. 1, the all-import methods of basic brewing are a must know. What you buy is important, but if you don’t brew that beer correctly, your friends are not going to come over to join you.

The simplest of the two basic options for brewing beer is called extract brewing. That’s where you start with the sugars already extracted from the grains in the form of an incredibly thick syrup. It’s faster but more expensive for the ingredients. Rightly so because someone did the work of extracting the sugars for you and it’s right that you should pay them for that work. Don’t discount this method. I actually modeled my Irish Red on the flavor I got from an extract kit.

The second method is all-grain brewing. That’s where you start with malted grain and extract the sugars yourself using a process known as ‘mashing.’ Think of it like making a really huge batch of barley tea. You toss all the grain into a large container and keep it at a constant temperature until all the starch turns to sugar. It’s a labor-intensive process and requires more equipment, but purists say it yields a better product. In my humble opinion, it’s not the place to start, especially if you’re dipping your toe. There are also hybrid methods where you use extracts and grains, but those come later.

As stated earlier, extract brewing is simpler than all grain. How much simpler? Well, for starters you won’t need to know terms like ‘mash tun’ or ‘sparge tank’ or ‘steep’ (maybe). You will finish in approximately 2.5 – 3 hours instead of the 6 or so you’ll need for all-grain. It is the most basic brewing process you can find.

The typical kit comes with the sugars you need to make the beer you want in large, heavy plastic bottles. It’s called ‘extract brewing’ because these sugars came from a process of extracting them from the same grains you’d use for all-grain methods, only without the dry grain. It may also come with some malted grain and a steeping bag. A steeping bag is basically a sack made of cheesecloth or muslin that holds grain but allows water to move freely through it. If your kit comes with a steeping bag, you will absolutely need that thermometer we talked about earlier.

The steeping bag only goes into the water when it reaches the proper temperature. Too cold and the starch won’t convert to sugar. Too hot and it starts to release something called tannic acid (tannins) that make your beer taste bad, and your mouth feel fuzzy. That’s good for red wine.  Not so much for beer. I usually tie the steeping bag to the stir spoon so that the bag dangles into the water but can be retrieved without trouble. 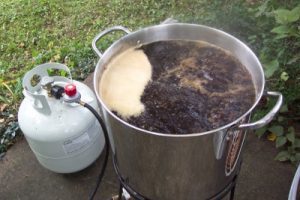 After the steeping step, assuming you needed it, you no longer have water. You now have ‘wort, ‘ and it’s time to boil. You crank up the heat and get it rolling as fast as possible. If you’re drinking, now is the time to have a beverage and review the next steps. Until the wort starts to boil, you don’t have much else to do.

When the wort is boiling, you’ll need that spoon and probably one of the rubber/ silicone spatulas from your kitchen. Most, if not all, of the extract, will need to slowly be poured into the boiling water. Notice I said slowly. If you pour too quickly and are not constantly stirring, you’ll likely scorch some of the sugar on the bottom of the kettle. That’s not good for anyone.

There is a set time for the boil which is usually outlined in your kit. It’s usually an hour, but it can be plus another hour or more, or minus fifteen minutes. Again, follow the directions. The instructions will tell you when to introduce the hops that came with your kit. If you introduce them at any other time than the required time, your beer will not be ruined, but it will change in character. There is a good bit of science that goes into the timing. That science involves words like ‘terpenes’ and ‘alkaloids’ and isn’t appropriate for an introductory primer. Follow the directions and use that timer we talked about earlier.

Cooling is the same for both methods, so we’ll get to that in a bit.

All-grain brewing is just like extract brewing with the exception of additional steps between the starting step and the boiling step. If you don’t have extracts, you need to do the extraction yourself.  Don’t worry. It’s a simple, process-driven system.

First of all, you need extra equipment. Lots of it. While there is a way to do small batches of all-grain using the ‘brew in a bag’ method (that’s essentially the steeping step from the extract process on a large scale) it will be limited to a batch no larger than 5 gallons and even then you’re pushing it. I recommend trying it a few times so that you’ll see how much more consistent the proper all-grain method is.

A mash tun is essentially a vessel that acts as a big tea bag for a mess of grain. If your recipe calls for ten pounds of grain, you need to put it somewhere. That place is your mash tun. Mash tuns usually work best if you have a false bottom which is a fancy word for a surface that’s full of holes so that water can pass through it, but wet grain stays put. It ordinarily has a valve with a spigot on the bottom so that liquid can be drained into a boil kettle.

A sparge tank holds sparge water. Don’t worry, the explanation gets better. Sparge water is the water you rinse the grain with after it has steeped so as to get as much additional sugar out of the grain as possible. Temperature is of the utmost importance in both the sparge water and the mash tun. Both of these vessels need to be insulated or heated to ensure as little temperature change as humanly possible. Since it’s far less expensive to insulate than to heat, ten-gallon beverage coolers make excellent mash/ sparge systems. The sparge tank, like the mash tun, tends to have a spigot that allows the sparge water to be drained ever so slowly over the grain, keeping the water in the mash tun above the level of the grain.

Because the sparge water should drip over the grain, it’s best to spread out the drip pattern. It’s not only possible but easy to do this by covering the grain with aluminum foil (reflective side down) and poking many holes in it. If you want to be all classy, though, a sparge wand is in order. It can be as simple as capped PVC with tiny holes drilled in it, or as fancy as an automated sprinkler system that meters out water on a schedule. The aluminum foil trick works pretty effectively, but most people graduate to the drip wand eventually.

You can half-ass all of the above without using tubing. But if you’re this far into the equipment purchase bonanza, a few feet of flexible clear tubing should be the least of your worries. In fact, I always keep a ten-foot length on hand in case of failures or hose splits. It’s rare, but it happens. While you’re at it, grab a few appropriately sized hose clamps too.

Come on, is the wort really that sweet? Yes. It’s like a nutty, but thin, syrup. I’ve actually poured it on waffles. If you pull off a good grain extraction, what you’re left with is actually pretty good to drink in its own right. In fact, one of the traditions I have is to take two or three ounces of hot wort and add a shot of scotch or bourbon to it. We call it a ‘hot scotchie’ because the wort is still warm and it gives you an idea of what you can expect from your beer once it ferments.

It begins with your boil kettle. I like to get the water in the boil kettle up to about 175°F (80°C) and hold it there. The actual temperature of the sparge water will drop over time, and when you exceed 177°F in the steep phase or the rinse phase, bad things happen to your grains (remember that tannic acid thing we talked about earlier?). Friends of mine take their sparge water up to 180° because you lose several degrees when you introduce hot water to room temperature grain, but I find 180° to be just too much of a shock to the grain. Your mileage may vary. When in doubt, follow the instructions in your recipe and on your equipment. Once you get your water up to the specified temperature, the fun begins.

Stay tuned for the exciting conclusion.

You Should Be Brewing Beer Because Beer is Amazing, Pt. 1